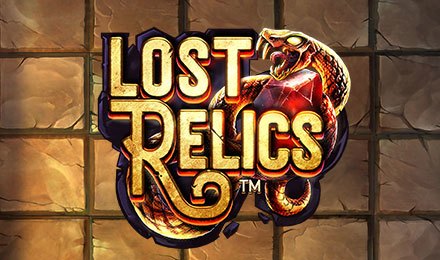 Lost Relics slot is a 5 reels and Cluster Pays game that is now featured at Wicked Jackpots Casino! Enjoy this adventure, that takes you on a journey to visit ancient ruins to discover lost treasures. As you spin the reels of the marvellously built slot grid, come across symbols like Hearts, Diamonds, Clubs, Spades, Helmets, Daggers, Bracelets and Snakes Wrapped Around Rubies.

Six or more symbols appearing in a cluster awards a win. Any symbol is part of a cluster if it is horizontally or vertically adjacent to the same symbol. Set your stakes on the Coin Value Field. Use the Autoplay option to play the game hands free! Set from 10 to 1,000 auto spins to play per game.

Amount of Paylines Selection: Form clusters with 6 or more symbols to trigger a win. The game does not have paylines.

Wild/Scatter Symbols
Wild come into play later in the game, on random features triggered on Lost Relics slot. The scatter of the game triggers the bonus round of the game.

Free Spins Feature
Grab 10 free spins to play after landing three of the scatter symbols anywhere on odd reels. On this feature, large treasure chests are hidden behind various symbols on the gird. Winning combinations reveal only part of the chests. The first two are small and a larger chest is later revealed. These could award:

Random Features
Every win triggered in the base game awards extra features and stake multipliers: