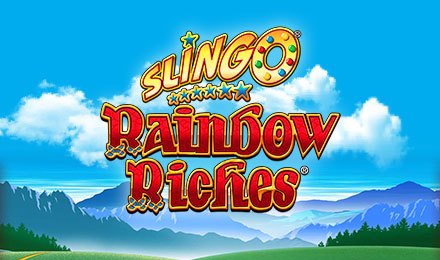 The Rainbow Riches series by Scientific Games has taken the industry by storm ever since its release. Now Gaming Reams proudly presents an amazing sequel of the game, which comes in the form of slingo. A dream come true for punters who get to experience the merging of their two favourite games, bingo and slots. Slingo Rainbow Riches still holds its rich theme, and is now featured at Wicked Jackpots, where you can play on your mobile, desktop or tablet!

Using the left or right arrows on the Bet Field, set your preferred stakes by increasing or decreasing the amount. Once you’re done, click on the Start Game button to commence your gameplay. When the game kicks off, you have 10 spins to play. And your aim would be to mark off five numbers on your grid horizontally, vertically or diagonally.

Slingo Rainbow Riches still consists all your favourite iconic bonus rounds. They have been tailored to fit the slingo setting, but still are fun and offer massive prizes! Now, let’s look at some of the symbols and bonus rounds that will boost your gameplay!

Symbols
Wishing Well
Three Wishing Wells appear on the grid, and you get to pick one to pocket a prize.

Cash Crop
50 coins will spin on the display, with a multiplier value behind each one. Once they stop spinning, the multiplier won will appear on the screen. After this, a coin flip takes place, and this will decide whether you get another one or collect your wins. Multipliers increase from 0.05x to 10x.

Magic Toadstool Red
Instead of three picks like the previous feature, four picks are granted. Giving you an extra chance to boost your wins.

Road to Riches
Spin the Lucky Wheel to move from one to six places on the golden trail. When the wheel lands on “Collect”, the multiplier where you have landed is applied to your wins.

Road to Riches Red
The same rules as the Road to Riches applies, but this time all prizes are doubled and you have the chance to strike gold!

Pots of Gold
Here, you are presented with Gold, Silver and Bronze pots. The pots spin and randomly come to astop where one pot is chosen for you. Then, you are awarded with the prize inside your pot. Multipliers vary from 50x to 1,000x!

Now that you’ve gotten a taste of what you can expect on Slingo Rainbow Riches, why not launch it and see what exactly it feels like to be trapped on Emerald Isle surrounded by gobsmacking prizes?