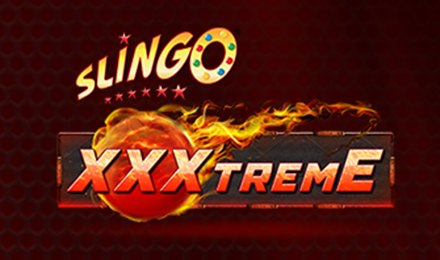 Elements of Slots and Bingo have been combined by Gaming Realms to bring you the amazing game named Slingo XXXtreme. Available to play at Wicked Jackpots, this marvel is a fast-paced game that will take you to another level. Are you ready? Wear your seatbelts, the rocket is about to take off to the beautiful Slingo world on Slingo XXXtreme. Log on to your Wicked Jackpots account where you can launch the game on your tablets, mobiles and desktop devices anytime and anywhere convenient to you. Not a member yet? Feel free to register and start your episode on Slingo XXXtreme.

Want to start your magnificent gaming session on Slingo XXXtreme? Simply begin by setting your stake value. After that, you will see a 5x5 grid filled with numbers. As soon as you start your gameplay, numbers will be drawn out. If you have the number that has been called on the grid, they will be marked. At the end of the game, you will be awarded a win if you managed to mark 1 or more lines. You will see the prizes for each line win reached displayed on the left-hand side of the grid. In one round, you will have eleven spins.

Bet Levels: No Bet Levels are available on Slingo XXXtreme

Amount of Paylines Selection: There are no paylines available as this is a 5x5 grid game

Coin Values: The minimum bet amount you can place on Slingo XXXtreme is £0.20 and the maximum is £100.00. At the bottom of the pay table, you can choose your preferred stake value by using the minus and plus signs.

Devil Symbol
This prevents other symbols from appearing. It can be a barrier when you’re aiming to obtain certain numbers to increase your winning possibilities.

Joker Symbol
The Joker Symbol on Slingo XXXtreme gives you the chance to pick a number on the column on which it appears. To complete the line, mark the numbers that are missing.

Coins Symbols
On Slingo XXXtreme you are awarded Cash Prizes instantly when these symbols appear.

Best of lucky for choosing the right numbers on Slingo XXXtreme!