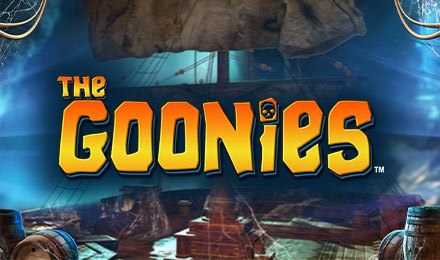 The Goonies are back! No, it’s not a remake of the cult movie from Steven Spielberg. Instead, Blueprint Gaming brought forward 5 reels and 20 paylines slot machine called- The Goonies Slot. It has some excellent bonus features such as cash bonuses, complimentary spins, random wilds, wild reels and symbol transformations. Explore the map and X marks the spot where you can unearth the treasures. Joke asides, you can trigger some winnings while spinning the reels.

To start your gameplay on The Goonies Slot, adjust your stakes. You have the option to click on the ‘’Spin’’ button or AutoPlay Feature. The Autoplay feature plays several spins and it allows you to choose several plays, the win and loss limit. There are low and high-value symbols on this slot. A, K, Q and J make up the low-value symbols. What’s more, premium symbols such as Jolly Roger flags, treasure chests, golden balance scales, pirate ships and pirate skeletons.

Bet Levels: None on The Goonies Slot.

Amount of Paylines Selection: 20-win lines on this slot machine.

Inferno Complimentary Spins:
his feature is launched on The Goonies Slot by landing on the Inferno Complimentary Spins segment of the wheel when the bonus is launched. When each spin starts, the Inferno moves across the reels and turn between 1 and 3 consecutive reels Wild. When the feature ends, the player has an additional chance to gain extra prizes. By spinning the wheel, you could reveal the following: COLLECT, EXTRA SPINS or One-Eyed Willy’s Treasure.